Transcending is the most intimate experience we can have, union with our true self.

All the wise teachers have said that the basis of success in life is “knowing thyself” or being yourself,  yet most people often go through their entire lives without ever knowing their true selves.

From the moment we wake up until we fall back into unconscious sleep our attention is continuously directed away from the self towards something outside, something we perceive, do, or think.

There is the knower, “I am”, and the known, “something” who are separate from each other.

When we transcend the mind comes into a state of no thoughts, no perceptions, no doing, just a state of pure being. The knower and known become unified, the knower knows itself. Knowing yourself and being yourself is the same experience.

But this doesn’t sound easy? Have you ever tried to have no thoughts? It seems impossible, because the more you try, the more you keep the mind active. The problem is in the word “trying”. That is where things went wrong with meditation as we know it today. This state can only be reached in a completely natural way. With the right formula, where the mind goes there completely by itself, because it wants to go there most of all. With the right formula, meditation becomes the easiest and most enjoyable thing you’ve ever done. (see how did Maharishi (re)discover Transcendental Meditation). The fact that TM is easy and effortless is not some nice to have, it is the essence of the success of this technique.

When people learn to transcend on a regular basis, through the Transcendental Meditation technique, they gradually cultivate the mind to keep this state of self awareness even during activity.

This means we come into a state where the inner silence, inner peace and inner happiness is never lost. Being yourself is like a tree with deep roots and a thick trunk. No matter in which direction the wind blows, no matter how hard, the tree is unmoved. We become far more resistant to stress and this has a direct positive influence on our health and well-being, we gain more self confidence, remain more “in the now” spontaneously, and have more success on all areas of life, personal and professional.

American psychologist Abraham Maslow describes the growth of these qualities in terms of self-actualization and emphasized the role of his so-called “peak experiences” in its spontaneous growth. There is a striking resemblance between descriptions of the experience of transcending and Maslow’s descriptions of peak-experiences.

It is possible to measure objectively how much a person can be himself, through the self-actualization researches that were developped by Maslow and other psychologists. Normally self-actualization stops growing around early adolescence, together with general intelligence. TM practitioners notice a continuous growth, however. 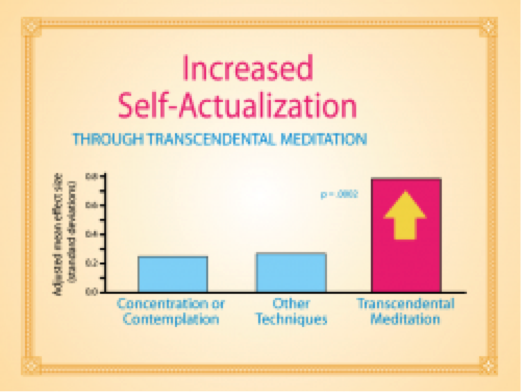 This is the difference between a completely natural technique and techniques where the mind is controlled in some way. Not only is the natural approach far more enjoyable, it is also far more effective.