Transcend, and the desire to drink alcohol decreases… spontaneously

Research with more than 4000 research subjects: Transcendental Meditation is 2 to 10 times as effective for alcoholism than any other approach ever researched.

An alcoholic is just somebody that wants to feel good and needs alcohol to create this feeling. Addictions are usually deeply rooted in body and mind, and superficial methods will usually not be able to make a big difference.  Transcending is an experience of the mind coming back home, in a 100% natural way.  It creates an experience of inner happiness at the deepest levels of one’s own consciousness. In this way, addictions can be treated in a much faster, more pleasant and more effective way, as is shown by more than 20 independent research studies (see below).

Transcendental Meditation (TM) is completely different from what is generally called “meditation” today.  It a a completely effortless, natural technique that anybody can learn in a few days time and that is pleasant to practice.  In stead of trying to control the mind, we let the mind settle into a field of inner happiness that everybody has inside, and this happens completely naturally and spontaneously.  And 6 Million practitioners and 600 scientific studies can vouch for the effects created with this.

“I’ve had a feeling of emptiness my whole life, I couldn’t channel my thoughts, was constantly worrying about things that didn’t matter and I had a lot of depressions.  I tried to fill this void with alcohol etc, with all expected consequences.  My self-confidence was zero.

Thanks to TM, I’ve been sober for 9 months (since I started to meditate) and I feel good.  I simply enjoy life, both little and big things, I do things I never thought I’d be able to do, and I’m enjoying them!  Thanks!”
Hendrik Verdonck, 36 years, Graphic Designer.

Why is transcending to effective to combat addictions?

Alcohol addictions are usually related to stress and its direct or indirect consequences: one doesn’t feel good about oneself and then it becomes difficult to control the urge to drink.  And realizing intellectually that drinking is not good doesn’t help because the part of the brain that is responsible for controlling urges is mostly disabled when the brain is faced with stress.  Transcending deals with both the cause and the consequences: less stress, more inner happiness and better impulse control.

So first we’ll try to explain why TM is so effective, why it works even when nothing else works, and then we’ll look at the research that confirms this effectiveness.

A recent study that received a lot of media attention (see CNN video) showed that Iraq war veterans, after only 8 weeks of TM practice, had 50% less symptoms of Post Traumatic Stress Disorder (PTSD), something that had never been seen before [3].

This provided an additional confirmation of the results of TM, shown in a previous research with Vietnam war veterans. 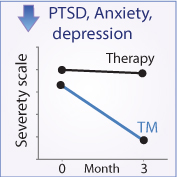 After 3 months of TM practice, there was a significant improvement in both PTSD, fear, depression, insomnia and alcoholism, and 70% of patients didn’t require any additional treatment.  With the control group that received standard psychotherapy treatments, there was no noticeable improvement. [4]

These are people with problems that are much deeper than most alcoholics.  If TM can help them, we can imagine that it can also be an effective treatment for the stress that lies at the basis of addictions.

Here is a video where the mother of one of the participants of the recent research study describes how TM helpt her son with his alcohol addiction and how it ultimately saved his life.

Stress has a direct impact on how our brain works.  Under stress, the production of the “happiness hormone” serotonin decreases.  A shortage of serotonin doesn’t only influence our inner feeling of happiness, but it’s also connected to migraines, insomnia, anxiety, anger outbursts, alzheimers, eating disorders and many other health issues, including alcoholism.  One can try to artificially increase serotonin in the short term through alcohol, but in the long term, this only distrubs the natural functioning of the brain more.

The experience of transcending on the other hand, activates the body’s inner healing power, so the brain can function normally again. The consequence? A completely natural increase in serotonin production during the TM practice, and eventually also in the long term [5], and the spontaneous reducing or disappearing of addictions after some weeks or months of TM practice, with on top of that some other pleasant side-benefits… as you can discover on this site.

Under stress, one looses control over ones impulses.  Alcohol further increases this problem and creates a vicious circle: less impulse control leads to more drinking and even less impulse control. Here is a scientific explanation of how this works, and how we can turn this circle into a virtuous circle through the experience of transcending.

The pre-frontal cortex, the part of the brain right above the eyes, is responsible for our higher function of thinking, like long-term planning, deciding whether something is right or wrong, and impulse control. This part is sometimes referred to as the CEO, or the general director, of the brain, because usually all decisions are taken there.  The pre-frontal cortex is that part of the brain that distinguishes men from animals. 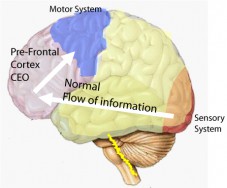 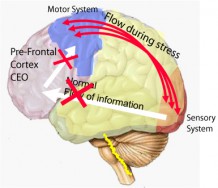 daily mail. (view of the brain from below). In this way, we create a vicious circle, which is really difficult to get out of. 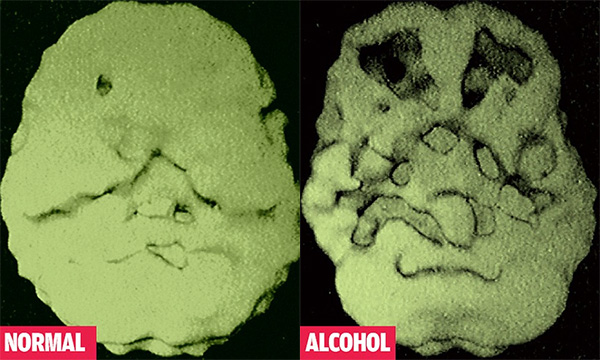 Transcending on the other hand will do the opposite. We start to fully develop the brain again (see transcending = full brain development), and we re-activate the connection between the frontal parts and the rest of the brain.

To what extent different parts of the brain are connected with each other, can be measured through EEG coherence measurements.

When one has this experience regularly, the coherence outside of the meditation will also increase, and in this way, the effect of stress and alcohol on the brain can be repaired again, step by step.

During the last 40 years, worldwide there have been 14 different scientific studies about the effect of Transcendental Mediation on alcohol addictions, with in total almost 4000 test subjects.

When there are this many studies, then we can calculate an average effect from all 14 studies, and in this way, we can get a much more reliable picture than we could get from looking at only one study.  We can then compare this average effect with all other methods every researched for alcoholism (there were 83 scientific studies with other methods). In this way, we can get a very reliable view on which method works best. 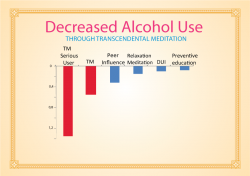 This comparative analysis shows that other relaxation and meditation methods can do very little for alcoholics and the same holds for providing information about the consequences of people’s addictions.  The effect of Transcendental Mediation (red) on alcoholism was 2 to 4 time as large as all other methods every researched (p=.009). These results become even more impressive when we look at the effect of Transcendental Meditation on “serious users”, the heavy drinkers, as was done in a few studies.  In this case, the effect of TM is almost 10 times as big as with any other methods. This confirms the general experience that the more dramatic the problem, the bigger the effect of transcending usually is.

The longer the TM practice, the less the need for alcohol

Just like for tobacco and drug addictions, several studies looking at alcohol addictions confirmed the general experience of TM practitioners that the longer one practices the TM technique, the less one feels the need to drink (heavily). 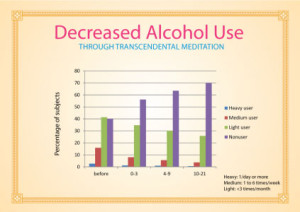 This is clearly illustrated by a large-scale study with 1,862 TM practitioners, executed by scientists from Harvard Medical School (click on graph to enlarge). The total number of “hard liquor” users is halved after 10 months. But when we look in more detail, we see that the light users decrease with about 30%, while the number of medium and heavy users decrease with almost 80% (from 19% before TM to 4% after 10 months). For the people that need it the most, the effect is the strongest.

Remark: This wasn’t a study where the test subjects learned TM with the intention to drink less. Researchers just looked at the spontaneous behavior after a period of TM practice for 1800 TM practitioners.  When a person really has the intention to stop, the effect is usually much stronger. 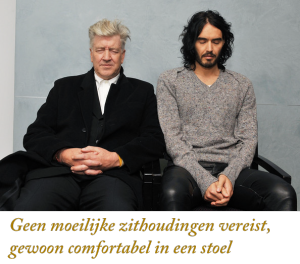 The experience of transcending can only be reached in a completely natural and effortless way.  It is an experience of complete inner silence, which can’t be reached by trying to be silent.  The more one tries, the more one actually keeps the mind active. This is why most other meditation methods (that require concentration) show almost no effects.

If one has had this experience once, then the mind remembers it and afterwards it can go back there spontaneously, in a totally natural and effortless way, provided that one uses the correct technique. This technique is taught step by step, during four consecutive meetings.  This initial training course is followed by a extensive program of follow-up meetings to ensure continued correct practice (for more information see what is TM? ).