How can a simple technique create so many benefits?

Discover on this page what exactly transcending is, why it’s much deeper than ordinary relaxation that is usually associated with meditation, and why it is so effective against depression, as confirmed by research from some of the top research institutes in the world, such as the U.S. National Institutes of Health.

Meditation is becoming more and more popular to manage stress, but the true experience of transcending has a far more profound effect than just relaxation. The oldest scriptures in the world describe transcending as a completely natural state of consciousness where the mind is completely silent, yet fully alert. They describe this state as the highest human experience, essential for our full human development.

However over time the experience of transcending was lost because people started misinterpreting what true meditation was all about. They thought it was about controlling the mind, forcing it to be quiet, which almost never works (the more you try to be quiet, the more you keep the mind active). 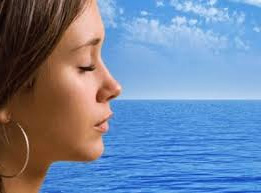 The Transcendental Meditation technique is the rediscovery of an ancient technique where the mind will go to this state of pure silence in a completely natural way, without any effort. When it is taught properly by a trained TM teacher, anyone can learn to transcend, it is easy and enjoyable to practice and extremely effective, from the very first sitting. More than 6 million TM practitioners and 600 researches can confirm the following benefits:

1. A profound state of rest: much deeper than ordinary relaxation, even deeper than sleep.
2. Inner peace and happiness: significant increases of happiness hormones.
3. Activating our inner healing mechanism: We are far more powerful to heal ourselves than we think
4. significant decreases of depression: Confirmed by several researches

When the mind transcends and in a completely natural way reaches that state of pure inner silence, the body spontaneously comes into a very deep state of relaxation as well, far deeper than even deep sleep.

This can be objectively measured by monitoring oxygen consumption.Ref.Science 27 Vol. 167 no. 3926 pp. 1751-1754 1970,This graph, from a Harvard University research study, shows that during TM, the body comes into a state of rest, twice as deep as even the deepest rest during sleep. More than 30 studies around the world have confirmed the deep rest during TM practice.Ref.Scientific American 226:84-90 1972

This deep rest activates the inner healing power in our own bodies.

Relaxation means relaxing tensions. The body has a completely natural way to remove all the tensions it accumulates. This is what we do during sleep, but the rest during sleep doesn’t go deep enough to remove the deeply rooted traumatic stresses. During the deep rest of transcending, on the other hand, even the deepest traumatic stresses will be removed.

The results are most obvious with the most traumatized among us. A recent study with Iraq war veterans showed a 50% reduction in PTSD and depression after only 8 weeks of TM practice.Ref.Journal of Counseling and Development 64: 212–215The results were so spectacular that CNN did a feature on it on US Veteran’s Day. (Watch the CNN video.)

This was just another confirmation of earlier research with Vietnam war veterans that was done 25 years ago.

In this study the TM group saw such significant improvements (reductions in depression, PTSD, anxiety and insomnia) that after only 3 months of practice, 70% of the war veterans required no further treatment. The control group that received standard psychotherapy showed no improvement.Ref.Military Medicine, june 2011>

War veteran’s stresses go far deeper than those of most ordinary people. If TM can help them, even when nothing else that has ever been tried works, we can imagine that it can help anybody.

The video below shows several more examples of just how powerful TM can be for those who are suffering from traumatic stress. It also shows why more and more scientists, educators, celebrities and governmental institutions are supporting the TM technique.

In search of happiness

The ancient texts described the experience of transcending as a state of deep inner happiness. This is why the mind will transcend spontaneously, if only it gets the chance, because it is looking for this happiness.

Today, though modern science, we can measure this state objectively, by measuring concentrations of “serotonin”, our happiness hormone. Research has shown that during TM practice, our serotonin production will spontaneously increase.Ref.BUJATTI, M., and RIEDERER, P. Serotonin, noradrenaline, dopamine metabolites in Transcendental Meditation technique. Journal of Neural Transmission 39: 257–267,1976. 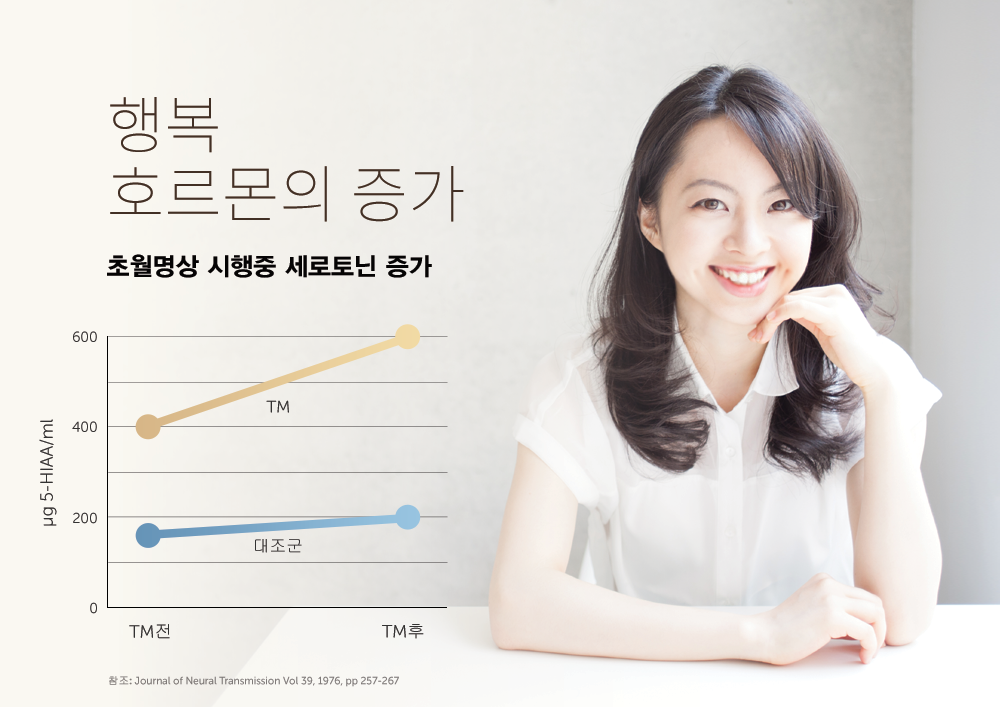 Medical research has shown that stress plays a major role in the decrease in serotonin production. Too low serotonin concentrations are related to not only depression, but a number of other problems as well, like addictions, migraines, insomnia, Alzheimers, anger, eating disorders etc. The increased of serotonin during transcending is one of the ways to objectively measure how the body is starting to repair itself from the disturbances from long-term accumulated stresses.

When stress can accumulate throughout life, it will eventually disturb the natural functioning of our nervous system, resulting in all kinds of psychological or physical health problems. It is noq estimated that 80 to 90% of all diseases are directly or indirectly related to stress.

Transcending allows the body to remove even our deepest stresses, and thereby remove the root cause cause of not just depression, but actually most health problems. We are far more powerful to heal ourselves that we believe.

A large scale study that looked at the health statistics of 2000 TM practicioners over 5 years showed a 50 to 70% reduction in hospitalizations. The older population showed the strongest decreases. A more detailed investigation showed 87% decrease in heart disease, and 60% decrease in cancer.Ref.Psychosomatic Medicine 49: 493–507, 1987 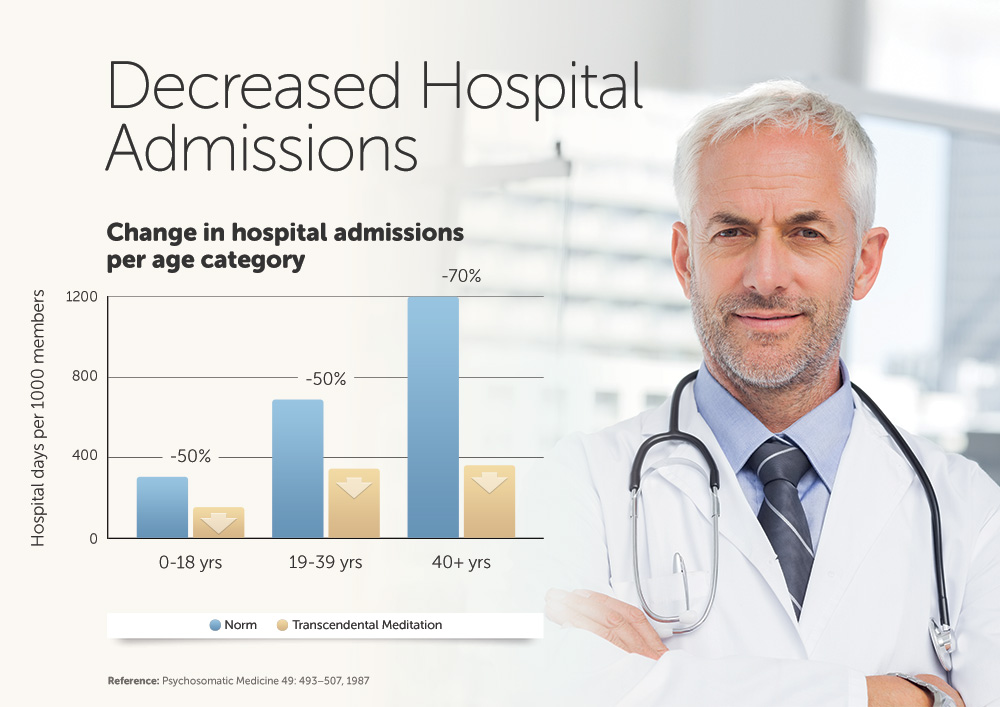 Over the past 40 years 350 published TM studies have confirmed the effects of transcending on our health. The results show, without a doubt, that the TM technique is not only the most thoroughly researched method to prevent disease, but also the most effective method ever researched.

Real meditation is effortless and pleasant to do, it can be learned by anyone, and gives immediate results. 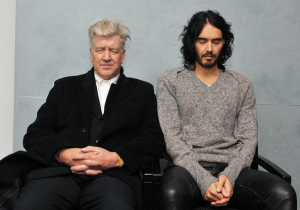 The experience of transcending can be achieved only in a completely natural and effortless way. It is an experience of complete, inner silence; that can not be achieved by trying to be quiet. The more you try, the more it keeps the mind active. This is why most current meditation methods that require concentration have little effect.

If one has had this experience once, then the mind remembers it and afterwards it can go back there spontaneously, in a totally natural and effortless way, provided that one uses the correct technique. This technique is taught step by step, during four consecutive meetings. This initial training course is followed by a extensive program of follow-up meetings to ensure continued correct practice.